“Vegan” is a word that is seldom ever heard in Nigeria. As a matter of fact, it is often nightmarish to think of going to Nigeria as a vegan, but that’s not the case anymore.

The last time I was in Nigeria, a little over half a decade ago, I was a vegetarian and that was already hard on its own. I remember going to a restaurant, asking if there was a vegetarian option and the waitress asked me, and I quote, “what’s wrong with you?” Not eating meat was seen as a problem because the majority of the population loved eating meat. You could even say that meat-eating was part of the culture.

Visiting for the first time as a vegan, I was slightly worried. Fortunately, I knew I would be able to cook. However, I also knew I was not familiar with a lot of the local vegetables due to rarely eating them prior to going vegan as they are traditionally cooked with meat and/or meat stock. I was also worried about my health because I did not want to end up in the hospital due to nutrient deficiencies and I didn’t know if I could find vegan foods rich in iodine, vitamin D2, vitamin B12, omega 3 and omega 6 fatty acids, to name a few. I still took the risk and went, although I packed a bag of seaweed, chia seeds, nutritional yeast, flaxseeds, kala namak (black salt) and vital wheat gluten in my bag (although all the packs had been previously opened so I wasn’t sure they would last for my entire visit).

I did not want to go to Nigeria completely unaware of what I could find to eat so, I consulted the person that runs the @veganinnigeria Instagram account and also searched for “vegan food in Nigeria.” I got a lot of help from both sources, with the first being beyond helpful. I learnt of supermarkets near where I was going to stay that stocked ingredients I cook with a lot over here in England and I also learnt of two restaurants/cafés that are strictly vegan.

Nigeria is a melting pot of cultures. As I exited the plane after almost a full day of travelling, I wondered if I landed in Nigeria, India, China or Lebanon. There was almost an equal mix of people of different races, colours and cultural backgrounds. People who influence the cuisines that could be found in the country and people who add more colour to the already traditionally colourful culture of Nigeria. As a result of these international cultures found in Nigeria, I felt more confident about, not just being able to find familiar things to cook nutritious meals with, but also finding places I could comfortably eat at.

Food-wise, I had a great time in Lagos, Nigeria. I started off with going to Ebeano and Renee’s Supermarket in Lekki Phase 1 where I found almond and soy milk, the flaxseeds, chia seeds, sesame seeds, baking ingredients (because a lot of the bread sold in Nigeria are non-vegan), various lentils and beans, such as mung beans, red split lentils, yellow split peas and kidney beans, nori seaweed sheets, vegan vegetable stock cubes and other ingredients I cook with. I also found Ben & Jerry’s vegan ice cream there, but my unique self does not like Chunky Monkey ice cream. However, I did find an ice cream parlour (Hans & René), which offered vegan options at their Radisson Blu branch. 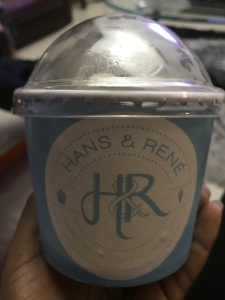 After those two supermarkets, I went produce shopping at the little street vendors scattered around the peninsula and stopped by my first vegan restaurant in Nigeria – Thrive.

Thrive, although currently in a little building, is a restaurant that I believe will grow with time and be able to accommodate a lot more people both in their indoor and outdoor seating, especially as the number of people caring more about their health rises. Thrive offers a range of fresh and healthy meals suitable for most people to eat as they are free from most of the common allergens – dairy, gluten, soy, fish, shellfish, nuts and eggs. The restaurant serves fresh smoothies, juices, root shots (such as ginger shots) and plant milks, as well as meals such as shawarmas, quinoa vegetable stir-fry, mac ‘n’ cheese, roasted okra and mushroom suya.

My only issue with Thrive is the cost of their food. For example, the mushroom suya cost N1,000 (£2) and for the quantity I received, I thought it was expensive. Also, it tasted pretty good so I wanted more of it without having to spend a lot of money. Then again, Lekki Phase 1 is quite an expensive area and as Thrive is relatively new, the cost of what they offer is understandable, but I hope that with time, as they grow, the food and drinks can become more affordable in order to reach both the wealthy and not-quite-wealthy –  anyone who wishes to give a healthier option a try.

Another thing I like about Thrive is the heart of its founder and CEO, Bolanile Olatunji. I didn’t get to meet her in person, but from following Thrive on social media (as requested by the very friendly and welcoming staff there) and speaking to its founder via DMs, I could tell that she is a very caring person. She uses her platforms, not only to teach others about ways they can become healthier versions of themselves, but also to generate funds for outreach projects such as feeding children from less privileged families at no cost to the children or their parents. Giving back to society is such a beautiful thing and one I believe everyone ought to be involved in. You can make donations to support Thrive’s outreach projects through the following platforms: PayPal (link takes you directly to page), Cash App – $THRIVEAlkaline and Venmo – @THRIVE-Alkaline.

A few weeks into my trip to Nigeria, I had the opportunity to get some food from another vegan place – Veggie Victory – the home of the Vegetarian Chunks. I believe that Veggie Victory is capable of making every non-vegan traditional Nigerian and international dish vegan and absolutely delicious. Their menu features dishes such as nkwobi, asun, suya, egusi, efo riro, ewa agoyin, jollof rice – traditional dishes which most of my non-Nigerian readers might not know (some of which I had to look up on Google, if I’m being completely honest), as well as shawarmas, burgers, salads, plantains, spaghetti bolognese, fried rice, fresh smoothies and fresh juices. My favourite thing of all, their prices are pretty good, especially for the quantity of food you get and Veggie Victory being located on the island (which tends to be more expensive, for those who are not familiar with Lagos). 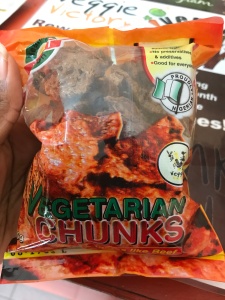 Every time I got food from Veggie Victory, I always got their nkwobi. That should tell you how good it was. I haven’t had nkwobi in over a decade because it is traditionally a meat-based dish and I was a vegetarian from childhood (prior to becoming a vegan). I still had an idea of what the flavour of the “sauce,” my favourite part, was, but to my more mature tastebuds, this was going to be a relatively new experience for me. Oh! It was a great experience! I can go on and on about that nkwobi! 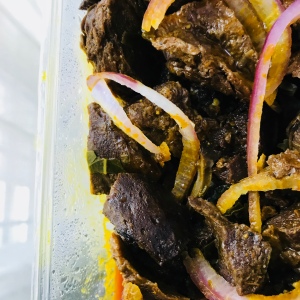 The times I got food from Veggie Victory, I also got their vegan suya or their asun. Both were great, although I thought the suya could do with a little more suya pepper and maybe some tomatoes on the stick or with some onions and pepper on the side like most places serve the conventional suya.

I’m going to give you my Nigerian dad’s review of the asun. There is an emphasis on “Nigerian” because the average Nigerian man is meat-loving and very critical of non-meat dishes. One of the most memorable sayings from my dad from when I lived with my parents was, “it is not food unless it has meat in it.”

I went to Freedom Park (the location of Veggie Victory) for the first time with my parents days before I returned to England. I couldn’t leave Lagos without one more taste of Veggie Victory’s food. While at Freedom Park, my dad asked mum and I to pick up some asun for him from one of the non-vegan stalls/shops. Unfortunately for him, the only person selling the traditional asun had travelled and I happened to decide to order the vegan asun (being the wonderful daughter I am who loves introducing her parents to great culinary experiences). I never lied to my dad about what was ordered. He knew it was vegan so he was reluctant to try it. With some persuasion from my mum, who is not vegan, but happens to love the nkwobi from Veggie Victory, he gave it a try.

Picture this – the face of someone trying to hard to hate something, but completely failing at it. That was my father’s face. he loved that asun so much that I had to take note of all his comments (I actually typed them up). They were:

My dad was won over by that vegan asun! 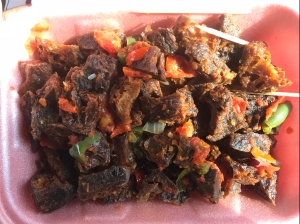 The day to head back to Nigeria was approaching and to make it a pleasant ‘goodbye’ till the next time I was back, my parents decided we should all go out to eat at Salma’s Authentic Lebanese Cuisine, a Middle Eastern (rather vegan-friendly) restaurant we had driven by when going out to dinner with some of my closest childhood friends (more like family). This was my parents’ first introduction to the Middle Eastern cuisine and they fell in love with it. Unfortunately, the food was too good that I didn’t remember to take a photo of it till I was, pretty much, done eating. 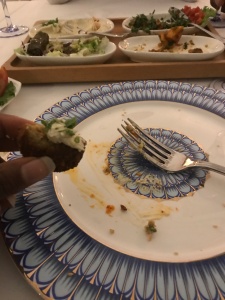 Overall, I had a pretty great culinary experience in Nigeria. It was absolutely delicious thanks to the places mentioned above and the completely non-vegan places – LilyGate Hotel and Brown’s Cafe, whose friendly chefs came out of the kitchen once they heard there was a vegan around to brainstorm recipe ideas for delicious vegan meals. Oh! And they were good! 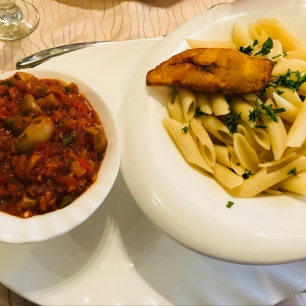 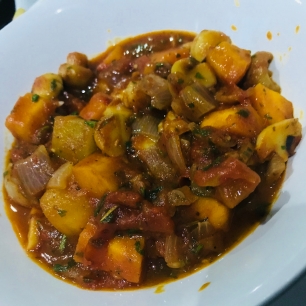 Thank you for the food you had to offer, Lagos, Nigeria. I guess it’s not so worrying visiting again or inviting other vegans there now. 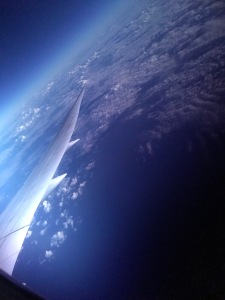