This amazing vegan zinger fried chicken was created by Tully Chanana who runs the Instagram page, @tullyzkitchen, and very entertaining TikTok page also with the name tullyzkitchen on which he shares many fun recipe and short motivational videos.

This vegan zinger fried chicken is a crowd-pleaser packed with a lot of flavour and extremely easy to make. We know you will enjoy it!

END_OF_DOCUMENT_TOKEN_TO_BE_REPLACED

This amazing vegan zinger fried chicken was created by Tully Chanana who runs the Instagram page, @tullyzkitchen, and very entertaining TikTok page also with the name tullyzkitchen on which he shares many fun recipe and short motivational videos.

This vegan zinger fried chicken is a crowd-pleaser packed with a lot of flavour and extremely easy to make. We know you will enjoy it!

END_OF_DOCUMENT_TOKEN_TO_BE_REPLACED

No Christmas dinner in Perú is complete without at least one rice dish being present. A common rice side dish at the Christmas dinner table is Arab rice containing raisins a Coca Cola which sweetens the rice a bit and darkens it to a pale brown colour. As expected, we will not be pouring Coca Cola into this recipe. Instead, we will be using some soy sauce to tan the rice and brown sugar to sweeten it. This idea was not originally ours. We were inspired by Lorena of Cravings Journal‘s choice to use those to serve the aforementioned purposes while we doing our research into this dish.

The spicy component in this recipe is habanero chillies. However, if you can’t handle the heat of the chilli (which is heavily cut down and counteracted by the sweetness of the raisins), take out the seeds in them and just use them for colour and flavour purposes. Also, exclude the chilli flakes garnish or just use as much of it as you can handle.

As rice during Christmas is usually colourful, as aforementioned, we added the chillies, not just for their heat and flavour, but for their colour too. We also worked with a bag of dried fruits containing raisins, sultanas, currants and candied peels as opposed to just raisins and we added some kale which is ever so lightly cooked during that last few minutes of the rice cooking.

This is a delicious side dish which you will love to add to your Christmas dinner and it only takes about 25mins to cook making it relatively quick and easy to make.

END_OF_DOCUMENT_TOKEN_TO_BE_REPLACED 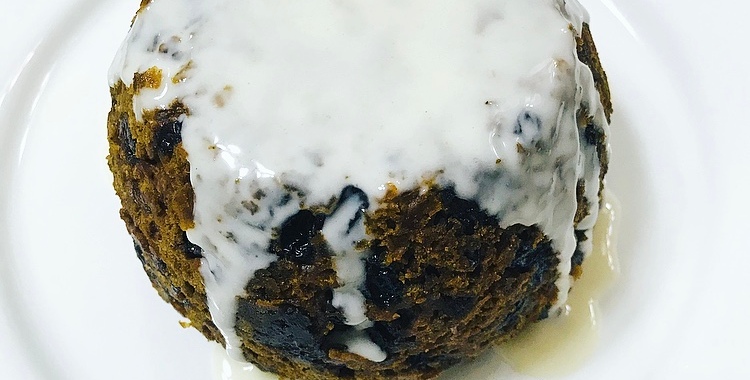 Christmas pudding is a delicious British steamed dessert consisting of fried fruits, rum or brandy, citrus zest and a few other ingredients. It is a great dessert that is often made a year before it is actually eaten and also often “fed” during that period by pouring some rum or brandy over it every few days or every month. This pudding looks like a cake, but trust us, it’s steamed, not baked.

Our recipe tastes great on the day it is made and does not require ageing or feeding although some might still choose to do those. It is a perfect representation of the flavours of Christmas on a plate and is sure to amaze your dinner guests, not just by its appearance, but by the traditional way it tends to be brought out/presented which is to set the pudding on fire by pouring flaming alcohol over it in a rather dark (but not pitch black) room. Don’t worry, the fire dies out on its own within 30 seconds.

For those who want to make or serve a Christmas pudding void of alcohol, replace the rum in this recipe with either freshly made apple juice or black tea. Alternatively, you can opt to not soak the dried fruits in anything. However, their texture and appearance are more appealing after soaking.

This recipe was kept nut-free for those who might be allergic. If you are a fan of nuts and none of your guests are allergic to nuts, you can add about 40g of chopped blanched almonds to your pudding mix.

END_OF_DOCUMENT_TOKEN_TO_BE_REPLACED

This apple-pear trifle was not intentionally made. It is the beautiful and absolutely delicious outcome of multiple failed processes whilst trying to test out the recipe for a different dessert idea. It’s the best accident we have ever made and it turned out so good we made multiple portions to serve with people who equally loved it and wanted the recipe ASAP! I guess it’s good that we noted everything we did when trying to figure out a new recipe through working with the failed parts of our initial recipe.

Traditionally, trifles are made with a base of fruit and sponge cake fingers which are suspended in jelly and topped with layers of custard, whipped cream and fresh fruit. However, for this recipe, we are taking a more modern approach to trifles. Our trifle consists of alternating layers of deliciously stewed apple-pear mixture and luscious coconut custard. It is then topped off with crushed meringue pieces which add another element of flavour and colour to the dessert.

This is the traditional trifle’s lighter cousin. We know you’ll enjoy making and eating it.

END_OF_DOCUMENT_TOKEN_TO_BE_REPLACED

Fruit cakes are present at various Christmas events across the globe. However, they are made with slight variances. For example, in some cultures, walnuts, and other nuts, are added to the cake batter while in others, candied peel, citrus zests and/or orange juice, black tea, brandy or rum are added to the batter.

This fruit cake recipe makes a delicious cake. However, it also serves as a base for any vegan fruit cake. You can customise it by adding extra ingredients to it to make it more suited to your cultural or creative preferences. We should note that if you add any additional liquids to the recipe, you should reduce that amount from the quantity of almond milk used.

The amount of raisins in this recipe is the amount to keep this cake sweet, but not overpoweringly sweet. Therefore, it is more suitable or those who do not enjoy very sweet treats. However, the salted caramel sauce will be rather sweet so, for those who prefer to avoid very sweet treats you can omit the sauce.

We hope you enjoy this recipe and it helps you make the perfect fruit cake for your Christmas desserts.

No celebration or holiday meal in Nigeria, or amongst Nigerians, is complete without one or two of these party rice dishes. Jollof Rice and Nigerian Fried Rice are easy-to-make, yet absolutely delicious rice dishes that everyone will enjoy eating. These dishes are usually never served alone. Most of the time, they are served with sides of fried plantains, a salad/coleslaw and some meat. In order to keep your Christmas meal plant-based, you can substitute the meat with your preferred vegan alternative, tofu or tempeh.

We should mention that our jollof rice is made following an Igbo (Nigerian tribe) recipe which tend to feature visible bell peppers in the final dish. Our fried rice is also a bit paler than that which is more common due to the colour intensity of the stock we used (as we’re not using meat stock or Nigerian chicken seasoning cubes which tend to be a relatively yellow). However, our fried rice tasted like and authentic Nigerian fried rice.

We hope you enjoy our vegan jollof rice and fried rice recipes!

END_OF_DOCUMENT_TOKEN_TO_BE_REPLACED 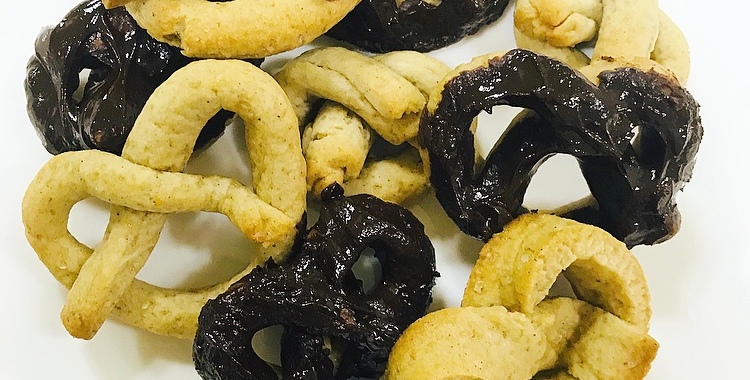 Pretzels are a beloved German food. However, a lot of people have never tried actual German pretzels. Traditional pretzels are soft and delicious as opposed to the popular Americanised pretzels which tend to be crunchier, almost like a thick crisp.

In regards to the Lebkuchen Pretzels, these are small gingerbread cookies which are shaped into pretzels with a chocolate coating on some of them. They are sweet, but not too sweet, and they are a delicious treat which you and your loved ones will be sure to enjoy.

END_OF_DOCUMENT_TOKEN_TO_BE_REPLACED

These vegan Italian Christmas cookies are soft and pretty cake-like, but they’re cookies! When deciding to make these, as we had never made anything like them before, we compared multiple traditional swirled Italian Christmas cookie recipes and then averaged out everything and made them vegan by replacing non-vegan ingredients with the most appropriate vegan substitutions. Honestly, we feel so weird referring to them as ‘cookies,’ but that’s what they are!

Unfortunately, we did not have colourful sprinkles and we couldn’t find any that were vegan (and didn’t cost a fortune for a small bottle) so we just sprinkled chia seeds on them. In addition to that, as these cookies are very sweet already, instead of dipping them in a thick icing sugar mixture (as is traditionally done before sprinkling), we brushed on a light icing sugar mixture on its surfaces to make them more edible for those who can’t handle extremely sweet foods.

We hope you enjoy these…..cookies.

END_OF_DOCUMENT_TOKEN_TO_BE_REPLACED 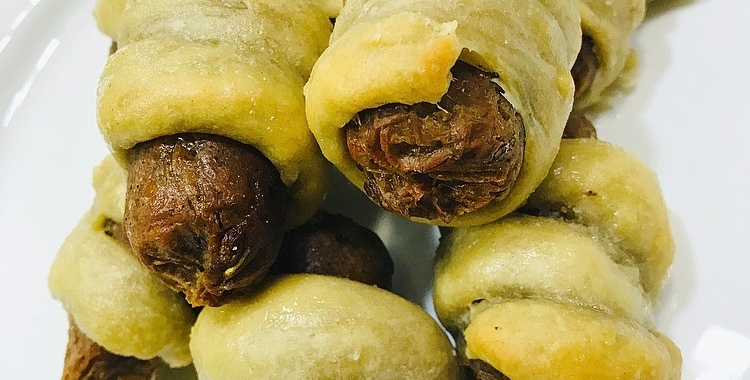 Pigs in blankets are beloved sides or appetisers at British Christmas dinners. They are great finger foods which people can easily snack on and they are delicious!

Although we’ve only ever encountered Pigs in blankets at British events, we are fully aware that this dish is also common in other cultures although with some variances. For example, in Germany, Würstchen im Schlafrock (which translates to “sausage in a dressing gown”) is eaten. However, the pastry is usually made from puff pastry. Other examples include the Moshe Ba’Teiva (which translates to “Moses in the basket”) in Israel which is covered in ketchup and, at times, is made using phyllo dough, the Argentinian version for which the sausage is topped with ketchup then wrapped with empanada dough and the American one which is wrapped in croissant dough, biscuit dough or pancakes.

For this, we have opted for a pizza dough which is one of the easiest doughs to make or purchase ready-made. The cocktail sausages are also made as a form of seitan. They are flavour packed and moreish.

Regardless of the way you choose to make your pig in a blanket, this recipe will be a delicious and easy guide for you.